END_OF_DOCUMENT_TOKEN_TO_BE_REPLACED

In the nineteenth century the drawing rose in the estimation of the art world. Collectors became increasingly interested in the medium, and fragmentary, incomplete linear compositions were considered particularly appealing and aesthetic. A transformation occurred: the drawing was no longer thought of as a preliminary study or a sketch, but as an artistic genre of its own. The line developed into the artist’s handwriting, as it were, and a profound exploration of this creative means began.  END_OF_DOCUMENT_TOKEN_TO_BE_REPLACED

Accurately capturing the effect of Dirk Salz’s paintings might be impossible with words or pictures. This is the case for most painting, of course, but it’s particularly true for a series of reflective works by the 57-year-old German artist, which feature dozens of layers of synthetic resin mixed with pigment on their surface. They have a peculiar effect on the viewer’s sense of space and depth.
The effect is “otherworldly,” says Pier Stuker, director of bromer kunst in Bern, Switzerland. The gallery has represented Salz for just over a year now. “It’s the combination between the depth created through the multiple layering of resins and the highly reflective surfaces that renders his works this strange and otherworldly character. You have to imagine a painting with a depth that allows you to lose yourself in it, and a mirroring surface that pushes you out at the same time.” …

Thoughts on Paintings by Dirk Salz

The painting as a window – the painting as a mirror – the painting as a wall. These are the three paradigmatic metaphors that have repeatedly emerged in ever-new variations over the course of the history of painting, indicating how we as viewers perceive painted pictures. The painting as an open window – „quasi una finestra aperta“, this being the classical formulation stated in Leon Battista Alberti’s treatise on painting from 1435/36 – constituted the central metaphorical image from the Renaissance to early modernity, which governed the relationship between painting and viewer: It was painting as the illusion of gazing into another space that lay beyond the aesthetic threshold of the frame. The painting as a mirror is a much more open notion, showing up in extremely different ways anywhere from Jan van Eyck’s „Arnolfini-Portrait“ to Gerhard Richter’s real mirror objects. By contrast, with the painting as a „wall“, i.e., an opaque material surface that the viewer’s gaze is unable to penetrate, it is primarily perceived as an object from which every vestige of illusionism has been banished, as a thing with characteristic features. The paintings by Antoni Tàpies with their graffiti-like incisions that make them appear like pieces of a wall are a prime example for this. END_OF_DOCUMENT_TOKEN_TO_BE_REPLACED

On Painted Pictures without Certainties by Dirk Salz

In our western culture, the View of Delft is the quintessential view of a city – which is to say, it is not only a view of Delft, but of a city per se. In 1660/61 the painter Jan Vermeer created this painting of his birthplace, and since then it has become synonymous for cityscape painting. In general we assume that this great masterpiece of our “construed” (1) western-European history of art “may in some ways be classified as being in the tradition of topographical painting” of the kind “that harks back to those city panoramas that frame the great maps of the Netherlands”. (2) Accordingly then, in the case of Vermeer’s View of Delft unquestionably it is also at least about the fact that due to his veduta, the topographic, physical, and, as it were, faithfully realistic View of Delft is recognizable, or maybe even only first becomes recognizable, and thus identifiable by those who approach the city. END_OF_DOCUMENT_TOKEN_TO_BE_REPLACED

Fields of Lines, Light, and Time. Drawings by Dirk Salz

Just as in the old days of classical art theory, drawings are still used today to anticipate works done in other genres. The majority of paintings, installations, sculptures, and often, sometimes even video works and performances, not to mention design and architecture, is essentially based on drawing processes during the design and planning stages. This is why the pertinent theoretic fundamentals of art in modern times considered disegno to be the “father of the art”, since the design drawing immediately refers to the artist’s first idea, the concept of the work of art, both in terms of its plan and “reception”. The reasoning goes that in the drawing, the intellectual imagination of the artists is at its purest and most genuine, and thus, it is the creative heart of his work. In keeping with this, the drawing pencil and sketchbook (or their digital computer substitute) are still the most important items in the toolbox of ideas for many artists. Working out preliminary drawing studies is still a completely natural method of clarifying and defining the concepts of painterly and, in the broadest sense, sculptural projects.

But in the work of Dirk Salz precisely the opposite applies. The idea behind his series of drawing works has developed entirely out of his painting. Their basic impulses stem from experiences with processes and questions that are of a purely painterly nature (whereby the word “painterly” actually needs quotation marks, since Salz’s methodic process of dealing with paint has little to do with the traditional notion of painting as brush work). From 2003 on, Dirk Salz had been exploring artistic possibilities that arise from applying paint to the surface with spatulas and scrapers. This semi-mechanical process allowed him to carry out the painting act as an open process based on a dialectic of planning and chance. From this process-based manner of painting, at least two types of, in the broadest sense, graphic or draftsman-like structures came about in his pictures. On the one hand, these were linear forms, which resulted from applying the spatula to the surface and then lifting it off again; on the other hand, in the interior surfaces of the paint substance, delimitations of form occurred that were unpredictable, sharply delineated or even softly progressing, “outlines” of amorphous fields, these having come about in those places where the upper layer of the paint material “tore off” and the layers of paint underneath became visible. The emergence of planned and accidental graphic structures that resulted from the material and the painting process gave rise to thoughts that the principle of „controlled chance“ used in painting could also be tried out in a graphic medium with the means of pure drawing. Surprisingly, the solution was found in the most familiar and classic form: as drawing with pencil on paper.

END_OF_DOCUMENT_TOKEN_TO_BE_REPLACED 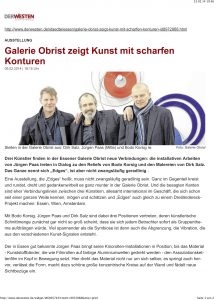 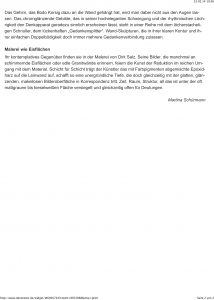 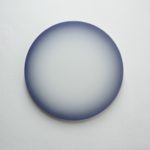